What is Manuka Honey UMF®?

90% of “manuka honey” sold worldwide are FAKES. Sometimes it is just plain normal honey, other times it is even worse, nothing more than sugar syrup with chemicals added. The New Zealand govertment is very appalled at this damage done to real manuka honey branding, so the government founded and managed an UMF Manuka Honey Board to officially label and monitor honey farms in New Zealand that meets the standard of real manuka honey.

Most supermarkets, retailers and even distributors do not even know that the manuka honey they sold is fake, so they tend to consciously promote their “sales” or “trusted” manuka honey to the unsuspecting customers. They may cited that UMF labels is too expensive for real manuka honey, but that is not the truth as NZ government insists on UMF labels now.

Be cautious for your family and your health, buy only UMF endorsed manuka honey.

What is Manuka Honey?

For thousands of years honey has been known for its special properties. Certain honeys from specific plants have a greater range of attributes than others, and the honey that comes from some varieties of the New Zealand Manuka bush (Leptospermum scoparium) is one of these. 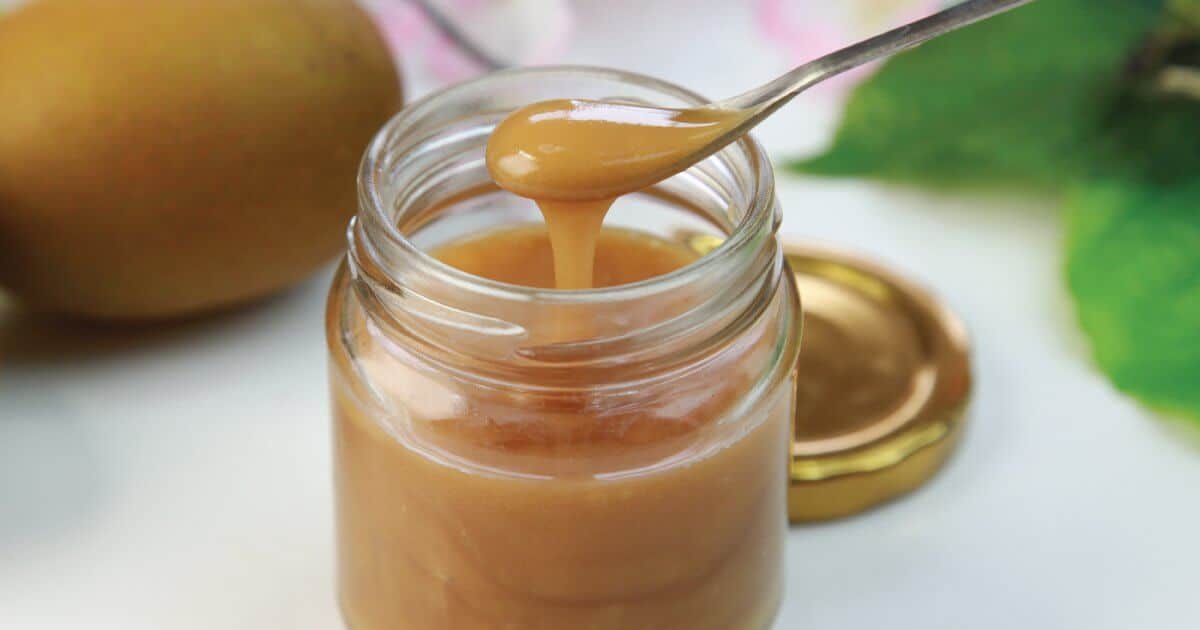 Manuka honey is a form of monofloral honey produced by bees that collect nectar from the flowers of the Manuka bush or tea tree (also known as Leptospermum Scoparium) indigenous only to New Zealand and a tiny zone off Australia. Manuka bush on thrives at this specific climate zone, and also due to the rich dark soil of New Zealand.

Worker bees then add an enzyme, glucose oxidase, to the nectar inside the hive in order to preserve the honey for storage and uses later.
When manuka honey is eaten, the glucose oxidase enzyme will  then slowly releases hydrogen peroxide, which is of anti-bacterial . The levels of hydrogen peroxide released is of a decent level to destroy bacteria but yet safe enough not to affect any of our human tissues,

What is UMF® for manuka honey?

Peter Molan, an associate Professor in biochemistry from the University of Waikato in Hamilton, New Zealand, he is one of the pioneer of scientist to research the benefits of manuka honey.  In 1981, he discovered that some samples of manuka honey contains a non-peroxide component and started to tinker with research on manuka honey’s properties and benefits for consumption.

Warning: Do NOT confuse active manuka honey UMF 20+ or MGO 400+ (any numbers) with Active Manuka Honey 20+ (any number). If the honey is not labeled with UMF or MGO, you are buying only table honey.

Tests conducted proved that after adding a catalase to the samples of Manuka Honey in order to remove the hydrogen peroxide, some samples still had a significant antibacterial activity. Dr. Peter Molan named this non-peroxide element UMF®, Unique Manuka Factor.

Dr. Molan’s researches proved some of Manuka Honey benefits as the most powerful bacteria killer even when diluted 10 times. He recommends Manuka Honey especially for people with weak immune systems. 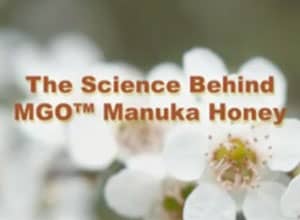 Laboratory tests found the UMF® property to be effective against a wide variety of bacteria including Helicobacter Pylori( known to cause most stomach ulcers), Staphylococcus Aureus( Staph), Escherichia Coli ( the most common cause of MRSA and other infected wounds) and Streptococcus P.

There are a number of assays and techniques including newly emerging work on determining what Manuka is that will be available to the consumer to verify the origin and provenance of this distinctive product. The UMF® rating is a measure of the attributes and values that make up Manuka honey, and assures purity & quality.

The UMF grading system appraises natural markers found in Manuka honey, and assures purity & quality. This is compliant with the recent interim labelling guidelines published by the Ministry for Primary Industries.

The UMF grading system has two components which are expressed on any UMF licenced honey product:

To receive a UMF® grading, a honey must have the presence of DHA (dihydroxyacetone), Methylglyoxal, and Leptosperin. The UMF® rating is a measure of the attributes and values that make up Manuka honey, and assures purity & quality.

Why is manuka honey or manuka oil so expensive?

Manuka oil and manuka honey comes from honey that is monofloral- a type of honey which has a distinctive flavor or other attribute due to its being predominantly from the nectar of one plant species. Compared to polyfloral honey, which bees can harvest from many different flowering species, monofloral is more difficult to ensure. Manuka oil or honey must be from bees working on manuka bush.
Manuka bush are only found in New Zealand, and a small tiny zone of Australia. It requires a specific climate and the soil found in the New Zealand and the zone of Australia to grow well. As you can tell, the supply is limited to only these plantations in New Zealand.

In recent years, lab tests and reports have discussed and promoted the benefits of manuka honey, and the general public is now aware of the health benefits. As such, demands have skyrocketed and huge demands along with limited supplies made manuka honey and manuka oil much more expensive than normal table honey and oil.

What is the difference between UMF and MGO / MG and other manuka honey standards?

UMF is official standard by New Zealand Government while MGO and MG are standards created by major manuka, honey brands.

UMF is a grading scheme endorsed by the New Zealand government is considered the gold standard for ensuring authentic manuka honey with the correct minimum methylglyoxal level for each grade. UMF for manuka honey is the best standard you can trust. Every batch is laboratory tested to prove it has the correct level of methylglyoxal for its grade of UMF 5+, 10+, 15+ and etc.

Technically UMF refers to the level of methylglyoxal, and methylglyoxal is shorted formed to MGO so some enterprising manuka honey business took the MGO labeling to become a ranking of its own.

MGO –  a ranking referring directly to the methylglyoxal in manuka honey 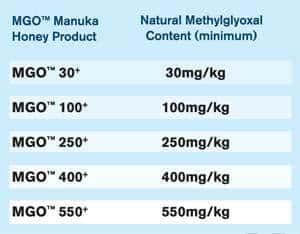 MGO is the 2nd tier, they are owned privately by companies that want to give a trusted authenticity to consumers. MG is similar and ranked a close third in terms of recognition. Though not as solid and gold standard as UMF, they can still be trusted as these private companies are doing their best to protect the rating.

There is various misuse of the label NPA too. NPA refers to the non-peroxide activity in manuka honey, the higher the better.

Convert UMF to MGO, MG or NPA for manuka honey

If you are unsure what are the similar level for UMF to MGO, NPA, you may like to use this table to convert between manuka honey UMF, MGO and NPA ratings.

Use this table to convert between manuka honey UMF, MGO and NPA ratings. 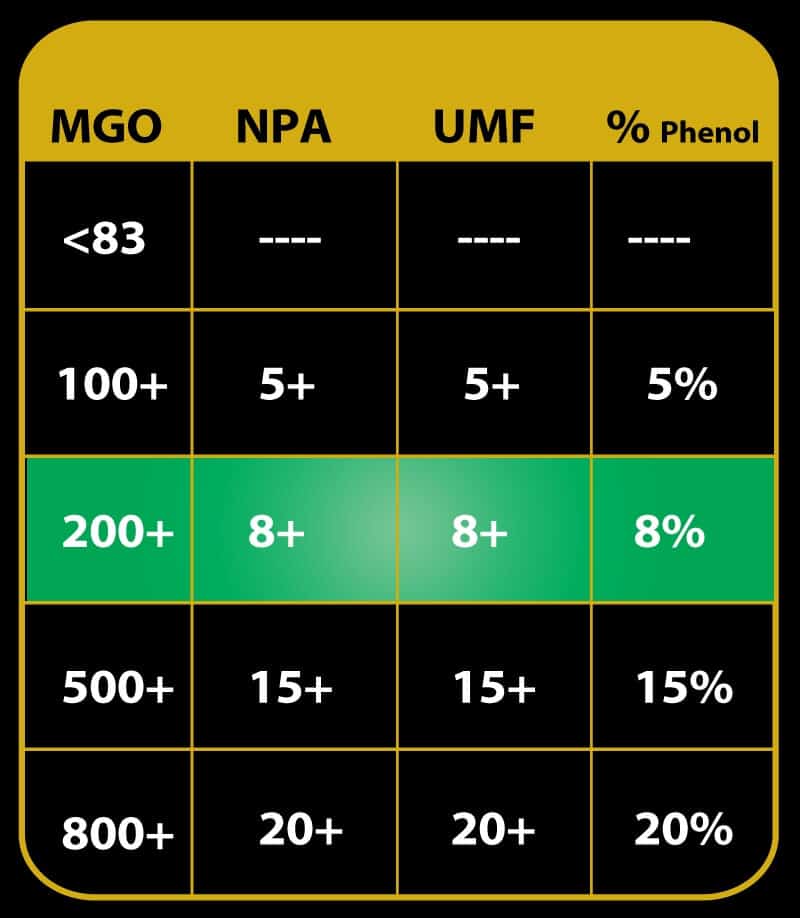 Do note that UMF manuka honey bought from a reputed retailer means it is lab tested and certified to be manuka honey. MGO, MG and NPA has less authenticity compared to UMF, hence their pricing tends to be lower. Only buy these products after you done your research. If not, stick to UMF brands.

Any other rating of manuka honey that is not UMF, MGO or MG, please be cautious. There are numerous private rating that is not endorsed, and may not even have scientific lab tests to prove the methylglyoxal level in the manuka honey. Various fly-by-night rankings are created and not well proved.

Should I trust UMF or MGO or MG for manuka honey authenticity?

UMF is officially endorsed and undergo consistent and regular laboratory testing. UMF is the gold standard for manuka honey.

Summary: UMF is the trusted standard for manuka honey, followed by MGO and MG.

Buy only Manuka Honey with these UMF Logos 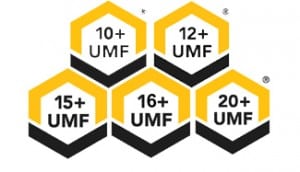 As there are many fakes and imitation branding such as MG, Active Rating and even faked “UMF” logo that is not the official NZ government’s endorsed UMF scheme. Please be cautious and buy only reputable brands from reputable experienced sellers.

Manuka Honey City Singapore has been selling New Zealand UMF Manuka honey as well as New Zealand artisan honey, shipped directly from New Zealand to our local warehouse in Singapore. We are proud of our designated specialty store and has been shipping parcels of UMF honey worldwide since 2014. Check out the range of UMF manuka honey that we carry.

Why Honey Is Good For You. Find Out All The Benefits Here!
Read More
October 26, 2016

Why is Comvita Manuka Honey The Best in New Zealand and Rest of the World?
Read More
October 26, 2016

Can you give honey to babies, toddlers? What are honey health benefits for children?
Read More
October 26, 2016

This Is Why You Should Eat Vitamin C! Benefits and Side Effects to boost immunity
Read More
October 26, 2016